The Year of the Nurse: In conversation with Whitney Mannion

This year, the World Health Organization is celebrating the important role of nurses in modern healthcare. To mark the Year of the Nurse and Midwife, we’re shining the spotlight on our own nursing staff members for a special IMO Q&A blog series.
Share on facebook
Share on twitter
Share on linkedin
Share on email 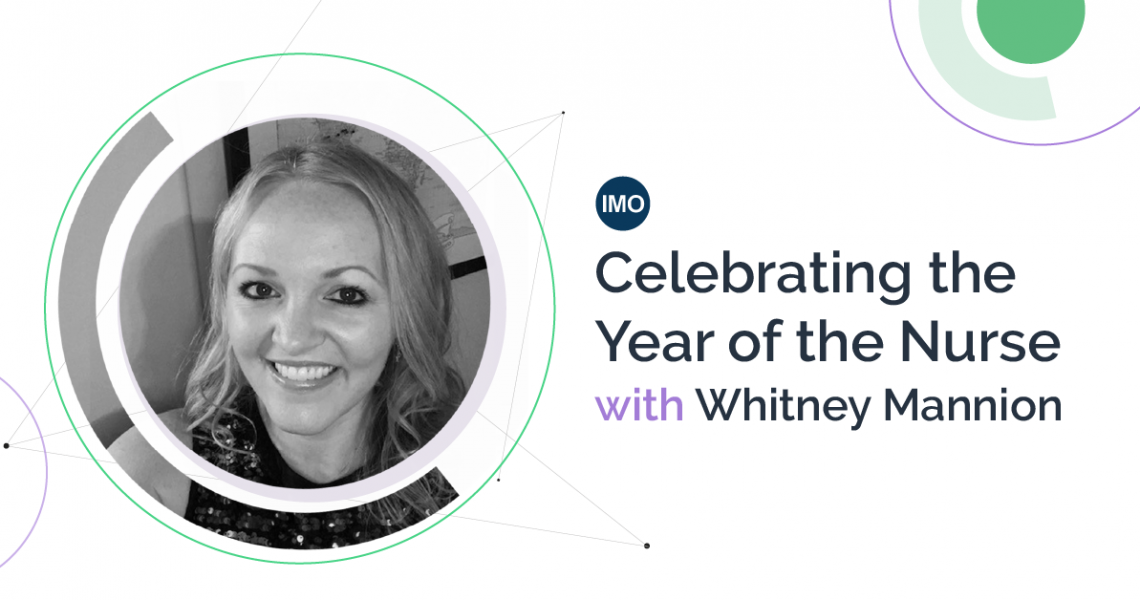 This year, pioneering nurse Florence Nightingale would have turned 200. To honor her legacy, and to highlight the crucial role that nurses play in patient care around the globe today, the World Health Organization has designated 2020 as the Year of the Nurse and Midwife. At IMO, we’re proud of the depth of knowledge and experience that our employees with nursing backgrounds bring to the company. To honor them during the Year of the Nurse, we chatted with several nurses on staff about their journeys as clinicians and health IT professionals. Check out our conversation with Whitney Mannion, MSN, Clinical Terminologist at IMO, below.

Why did you go into nursing?

I became a nurse with the ultimate goal of helping people. I had always thought about medical school when I went to college initially, but I ended up going in a different direction and pursued journalism. After I had been in the workforce for a few years and worked in a couple of major industries, I still wasn’t happy with my career direction. I started to think about what I always wanted to do growing up, which took me back to healthcare again. After doing some research, nursing seemed like the best fit. I had to retake all the core science classes again and ultimately got a master’s degree in nursing, which took about 4 years. I was fortunate to get a job working in the operating room (OR) right out of school, which I found fascinating – and still do!

Why did you eventually decide to focus on health information technology (HIT)?

Eventually, I hit a point working in the OR where I had worked for numerous prestigious medical centers and seen a wide variety of surgeries in all the different specialties. I wanted something different. I didn’t want to be on the front lines anymore, but I knew that I could still make a difference working on the computer side of healthcare. I eventually got my first informatics job helping a company transition from one electronic health system to another. Then, I went into telehealth nursing where a recruiter reached out about IMO.

What is the greatest misconception or misunderstanding about your profession?

I have only worked in the operating room so I can’t necessarily speak for other areas, but TV shows do not accurately depict what happens in there!

What is the most rewarding part of working in patient care?

I didn’t have a ton of direct interaction with patients since they were under anesthesia shortly after coming into the OR. One thing I always took time to do, though, was hold a patient’s hand if they needed to get an awake fiberoptic intubation – which is how we intubate patients when the airway is difficult to access. Most patients really struggled when getting that done, so I would hold their hands and tell them to squeeze as hard as they wanted to. Which they did – my fingers felt crushed too many times to count, but I knew that I was helping them get through something really tough and they appreciated it. Another thing that was always rewarding was calling families to update them on the progress of the surgery. Family members were always so grateful to hear any update I could give them.

If you had one piece of advice to give anyone in nursing school, what would it be?

Nursing school can be really hard and there may be times you want to just quit, but stick with it! You may not end up with a job you love initially, but there are so many directions you can go once you have the degree. You will find something that really interests you if you keep trying.

How do you think your role as an RN has helped you in your role at IMO?

My clinical nursing experience has helped me immensely at IMO. I liked to think of myself as a jack-of-all-trades when I worked in the OR, because I worked in so many different specialties and saw so many different types of surgery, equipment, and medical problems. I find myself using that experience to drive how effectively I’m able to do migration work at IMO. As a nurse, I also learned to adapt quickly to emerging situations and prioritize the most important tasks – skills I use daily. All the hard work, and the knowledge I gained from my experiences, provided a solid foundation and led me to a career and company that I just love.

To hear from more from the outstanding nurses on IMO’s staff, check out our previous chat with Lou Ann Montgomery. 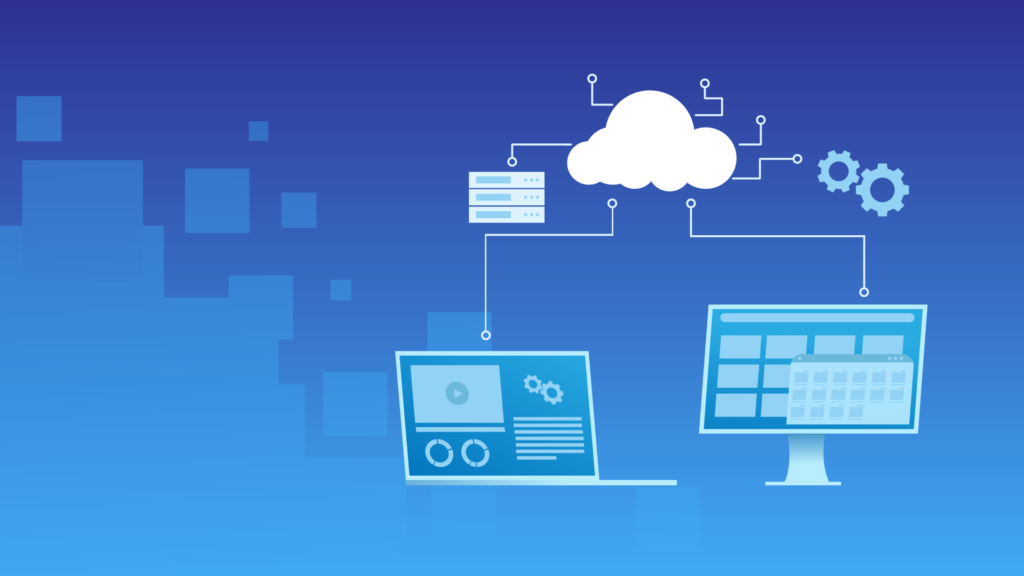 Strategic goals and partnerships: A look at IMO’s cloud journey

IMO decided to implement strategic cloud capabilities in order to improve our product development and customer service. During the process, we gained a lot and learned a lot. Check out our key takeaways below. 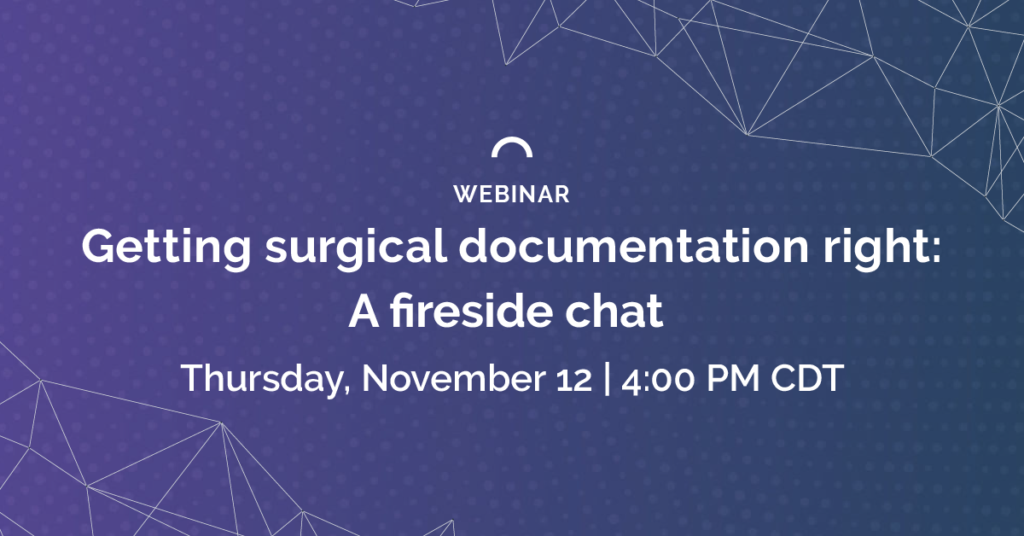 Listen in on our fireside chat as IMO and AORN Syntegrity® experts discuss pitfalls and best practices, including how to leverage checklists, templates, your EHR, and third-party solutions to improve documentation without overburdening clinicians. 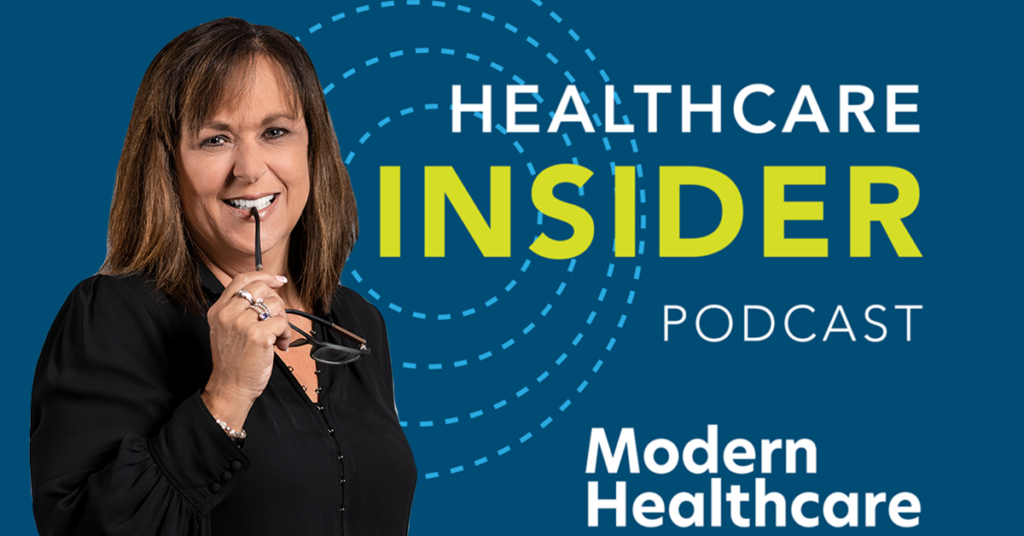 IMO CEO Ann Barnes believes in leading with intention to build teams that are diverse and inclusive. Listen to her interview with Modern Healthcare’s new podcast Healthcare Insider.